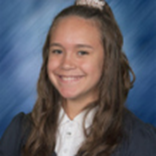 Music is a powerful thing and playing an instrument doesn't come easily to everyone. Victoria was a shy girl who didn’t know if joining the Bruce Guadalupe Middle School Band was a good idea. However, after some consideration, Victoria decided to put herself out there and join the band.

Victoria hesitantly chose to play the flute starting in 6th grade. Without previous experiences, she realized that the other musicians in her section began to progress at a faster rate than her. She was frustrated and considered giving up playing an instrument. But she turned that negative thinking into motivation. She was determined to get better and keep music in her life.

Victoria chose to come in for extra lessons and ask for more help. She put in the work that it takes to be successful, and by the beginning of her 8th-grade year, she was the best flute player in the band. She now attends Reagan High School, where she is continuing her musical career in the high school band. Thanks to her dedication, determination, and encouragement from her UCC band instructor, she never gave up and is now an excellent flutist.